I touched upon James' diagnosis of ADHD in the epilogue. I didn't even get into the accompanying diagnosis of dyslexia. Over the years I've had expectations about what I might face with these diagnoses, I've withstood the misconceptions of those around me, and I've been blindsided by the realities of life with my ADHD/dyslexic son. Here are a few examples:

I expected him to be easily distracted.

Those around me said "Eh...he just has "selective hearing". All he needs is some discipline."

I was blindsided with the 12-step process of getting him to take his pills in the morning. It starts with, "James, please go take your pills." when he's in his bedroom. If I turn to help Maddie with her uniform, I'm doomed - there's Magic cards on his floor, calling his name. I prompt him out to the hallway. Now the bathroom (with the allure of running water to wash marbles) becomes my nemesis. I get him past the bathroom, but I'm not yet free to give Emily her 3rd wake-up call of the morning; oh no. As we approach the kitchen, the TV comes into view. I know better than to have it on yet - that would guarantee defeat. But there's the PROMISE of possible TV, and that, alone, is a formidable enemy. If I can successfully steer him into the kitchen, without Maddie tripping me up with a request to help her find her favorite sweater, I can get him to the counter where I have strategically placed the pills and a glass of milk. I see him with the pills in his hand, but have learned from past disasters that this is NOT good enough. God forbid Hannah chooses that moment to void her morning bladder, flooding her bed - or worse - have a blow-out diaper requiring a last-minute clean up before the bus arrives. Any number of things might be on the kitchen counter or dining room table to pull James' focus off those pills. I have to STAY vigilant! He's raising the pills to his mouth- and Daniel calls to me, wondering where his car keys are. Son-of-a... do I chance it? Do I turn my attention to the couch cushions I know the keys fell into last night? Experience says...no. Absolutely not. So I watch for the actual swallow (which, realistically, still needs one or two more prompts)...and look forward to tomorrow morning's exciting episode of "How Many Ways Can A Child Be Distracted From A Simple Task?". Now to get him dressed...

Those around me said "Eh...boys will be boys." OR "Eh...all he needs is some discipline."

I was blindsided when he broke the rules with an i-Pod Touch he got for Christmas within hours of receiving it (he took it to his room after bedtime). It was taken away for a week (with the wailing, dramatic temper tantrum that accompanied said consequence). Within 24 hours of getting it back a week later, he broke the rules again. Another week without it, another ridiculous melt-down. At the one-year point he had had the device in his possession for a combined total of approximately 20 hours, and calmly accepted the loss when told it was being taken away AGAIN, until at least the end of the school year for, yet another, infraction of the rules. With commendable insight he was able to voice the underlying challenge. "I know I'm breaking the rule. I just see it sitting there and I can't help myself. If there's a chance I might get away with it, I'm going to try."

I am also blindsided by the fear of this challenge in a few years, when coupled with a pint of testosterone running through his veins...

I expected him to maybe be bothered by tags in his clothing because I had heard other parents talk about that.

Those around me didn't even see this concern worthy of comment, but if pressed would probably inform me that discipline is all he needs.

I was blindsided by the extent of sensory integration issues. Not only did tags become intolerable, the seams in clothing became too much to handle...along with any type of texture (like corduroy, wool, or denim) or "extra dimension", like a [puffy] down jacket. His wardrobe quickly whittled down to cotton t-shirts and sweatpants, fleece sweatshirts (lots and lots of them, since he tends to lose two to three/week at school), and socks (nope...not even underwear meet his stringent clothing requirements). Worse than the skin sensitivity, was his growing aversion to tastes, smells, and food textures. He went from having a pretty well-rounded diet as an infant to just eating vanilla yogurt and plain whole wheat pasta (not even butter or cheese) by the time he was four. With much occupational therapy we've been able to work back many more foods into his diet, but with the added challenge of his [appetite-suppressing] medication, we struggle, beg and bribe him to eat enough to at least maintain his weight, landing him [currently] in the third percentile for his age [and dropping].

I expected him to reverse letters and numbers and maybe have some difficulty with reading.

Those around me said "Oh yeah. My kid did that, too. They grow out of it."

I was blindsided when his kindergarten and first grade teachers both told me, independently, that James was - by far - the most dyslexic child they had ever encountered in their careers (one was about to retire). His first grade teacher marveled at his tendency to start writing upside down and backwards on the back bottom right-hand corner of the paper...as if he was writing for her benefit, as she was able to see his writing upright and forward as she approached his desk. It took about two years to even get him to consistently start his writing in the upper left-hand corner of the front of his papers. I quickly learned that dyslexia is NOT just transposing letters and numbers. It's an intimate knowledge of every one of these symptoms and the challenges they present: 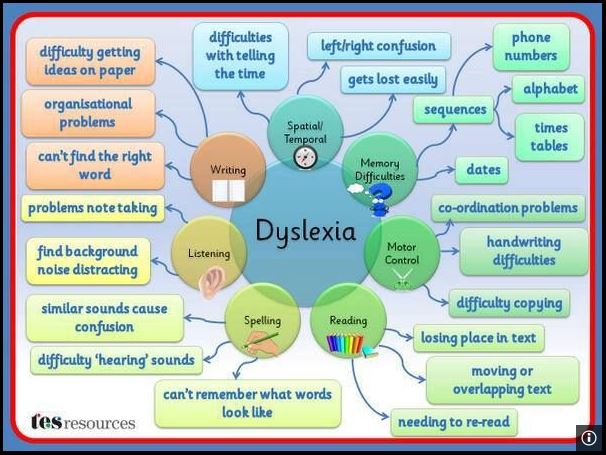 Those around me chuckle when I share my tales but I'm SURE they're thinking about how he just needs some discipline.

I was blindsided by days like this [copied from a recent Facebook post I made to a friend who was venting about her son]: "There must be a full moon or something. I was seriously considering "Sonocide" the other day, too. It wasn't the mile-long list of overdue school assignments I found in his backpack that morning...OR the log he decided [for who knows what reason] to throw through the shed window around noon. I remained REASONABLY under control when he later BIT his sister in a fight over a LEGO...and I breathed through the overdue library book e-mail I got that evening. But when I went into the bathroom that night and had to YET AGAIN tell my nearly 12-year-old son to get his butt BACK in there and WIPE AND FLUSH - that was the moment...that was it. Oh, and it wasn't some fancy-schmancy visualization technique that spared him. My son is alive today because the Seattle Seahawks won their game. Russell Wilson doesn't just visit kids AT Children's Hospital - he and his team now apparently help to PREVENT kids from even getting admitted."


I expected folks to have much less tolerance and understanding for these diagnoses than, say, Hannah's genetic disorder diagnosis. I saw the same thing with Emily's diagnosis of autism. When people can't SEE a diagnosis, they expect normalcy. When they don't see normalcy, they tend to judge...harshly.

People around me reacted just as I expected.

I was blindsided by the realization that this parenting challenge is arguably my biggest, yet. ADHD/dyslexia puts James in just about every high-risk category there is (more likely to drop out of school, more likely to do drugs, more likely to have trouble with the law/be incarcerated, etc., etc.). Hannah certainly presents her own set of challenges, but I can rest easy with my one and only goal of making each day as pleasant for her as possible, since we don't know what tomorrow will bring. Emily's autism and developmental delay have tried our patience, too, but there was no pressure to mold a self-reliant adult. We knew from a pretty early age that she'd never be able to live independently. That left only a goal of making sure she's happy in life. I'm being tested with James, though. The pressure is on. The stakes are high. He's a bright kid with lots of potential. It's up to me to step lively through the land mines his diagnoses present and guide, advocate, council, coach, and support him enough for him to find his success in life. Thank goodness he inherited his father's gentle nature, sense of humor, and infectious smile. They renew my resolve to do right by him every day. 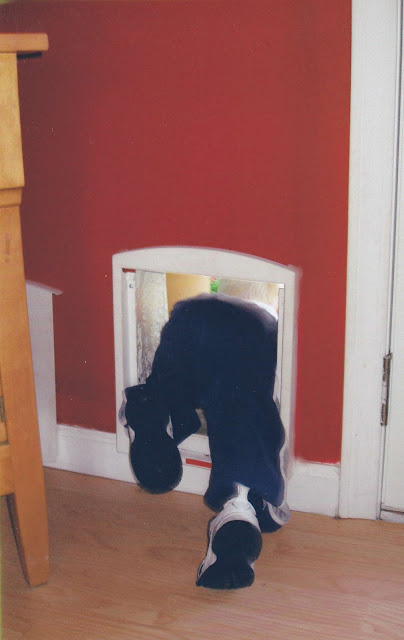 Role Confusion Here he was headed out the doggie door as a toddler. About 6 months of his potty training was spent convincing him it is okay for the dogs to pee and poop in the back yard, but that does NOT mean it's okay for him to do the same.

Rebel To The Core About the time he was scoffing at wall rules and refusing to smile for the camera at Sears, we found out he was on the "No Fly List" at the airport. Maybe the government took one look at him and made assumptions about the future? 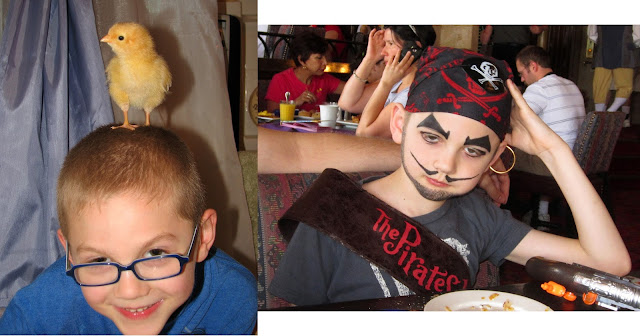 And Chicks Love Him...but he wasn't impressed at a breakfast with the Disney Princesses. 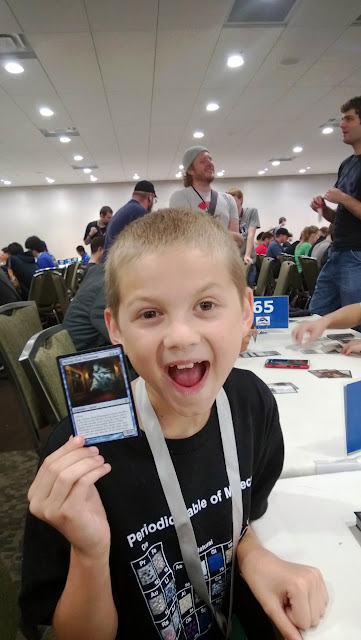 Geek In The Making Give him an epic magic card over a singing princess ANY day!

Posted by Stephanie Collins at 7:10 AM 37 comments: