This month marks the beginning of Maddie's second competitive gymnastics season. Last year was very eye-opening for me, leading to a conclusion: I am thankful to have a gym rat rather than a gymnast.

My observations began at her first meet last year. When watching the competitors, I noticed that some were considerably more refined in their performance than my daughter. I wondered if it was just that many of these girls were in their second year of competition, or if it had more to do with quality of training. Then I watched Maddie. I saw her beam with pride and joy in her own performance. That's all that mattered, so I let it go.

Then my "former-nurse ears" perked up to the conversation going on around me. Parents from other gyms were trading stories about the overuse injuries their girls were sustaining and recovering from. This was a level 3 gymnastics meet, where the girls are generally 5 to 8 years old. While I expected to see an occasional injury in [much] older gymnasts, I never thought I'd hear about injuries at this level! And overuse?! I scanned the gymnasts again, and - sure enough - I noticed a number of taped ankles and wrists and even a few girls sitting off to the side, unable to compete. I figured if more stringent training resulted in smoother performances - but also included increased risk for overuse injury...I'd happily take the more relaxed training any day.

Observations continued at our big travel meet for the year. We went to San Diego and competed against girls from around the country, as well as a few international teams. I was amazed at the level of performance from some of the gyms. Many of the girls seemed to be well on their way to the Olympics! Then I looked more closely. One girl (who looked no more than 6 years old) was berated by her coach for not lifting her leg high enough at one point in the floor exercise. This happened about 3 feet away from me - plenty close enough to see tears welling in the girl's eyes as the coach scolded her. She immediately had to go out and compete after the exchange. I feared her emotional state would effect her performance, but I breathed a sigh of relief when she finished an absolutely beautiful routine. Then I was disgusted when she walked off the floor. There was no high-five for her, no "Great job!". Nothing. I wanted to run out and hug the poor girl.

I heard more horror stories from our coach, featuring one in which she overheard a coach pitting one gymnast against another. The offending coach had pulled the two girls to the side and said, "Okay...this is it. There is only one spot open on the level 4 team for next year. Which of you is going to prove to me you're worthy of that spot, and which of you is going to have to go through another whole year of level 3?" Meanwhile, our girls (some of who were cast out of other gyms for not having the right body type or ability level) were laughing, giving high-five's, and yelling words of encouragement to one another. Maddie ended up nowhere near the podium at the end of the night. Her scores didn't remotely resemble those who walked away with the trophies. That was fine with me. She was off in the corner during the awards ceremony...playing with her teammates - her friends.

At another meet I struck up conversation with a mom from another gym. She mentioned her daughter would be quitting at the end of the season. I asked why, and she quickly said, "Burnout! The practices are just too much and she has had enough." I learned that her daughter (a 7-year-old) had 4-hour practices 3 days per week. Maddie had 3-hour practices, 2 days per week. No wonder some of these other gymnasts had such clean performances; they were practicing nearly twice as much! I was thankful for our relaxed practice schedule. It allowed for Maddie's weekly tutoring sessions, piano lessons, and one night of rest per week!

By the end of the season Maddie's skills had changed immensely - they had greatly improved (even earning her a highest all-around score in her last meet and a trip to the top of the podium!). What hadn't changed was her relationship with her teammates or her love for the gym. Her favorite days of the week remain her practice days, and after practice she still begs to stay for "free gym".

We no longer live in an age where parents kick their kids out of the house by 10 A.M. to "go play" and allow them back in at dinnertime. Now you run the risk of getting authorities called on you for neglect if you so much as allow your kid to walk home from school alone. So we rely on organized activities for our kids to get exercise and to form the bonds and relationships they would have when playing "out and about" in years past. All too often, however, parents seem to see these sports teams as lottery tickets rather than developmental tools. Even if their heads aren't swimming with visions of pro sports teams or the Olympics, they're often intoxicated with dreams of college scholarships. My kid does gymnastics, but she's not a gymnast; she's a gym rat. And I'd have it no other way. She improves skills, she stays healthy, she makes friends, she builds confidence...and she has fun. I'm as concerned about the expense of college as any parent. But if I'm going to enter the scholarship lottery, I'd rather roll the dice on academic possibilities, not athletic. Let sport be for fun. Let her be a gym rat! 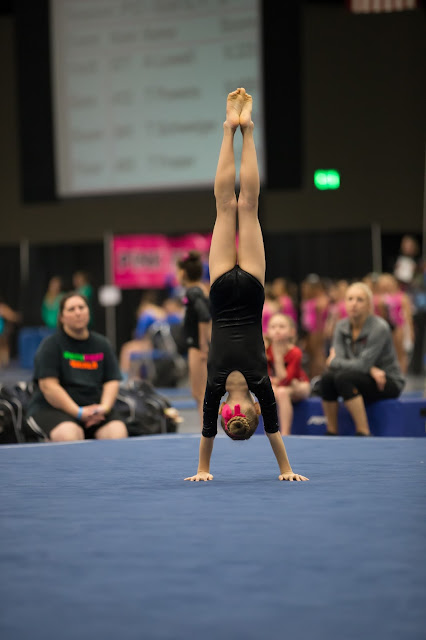 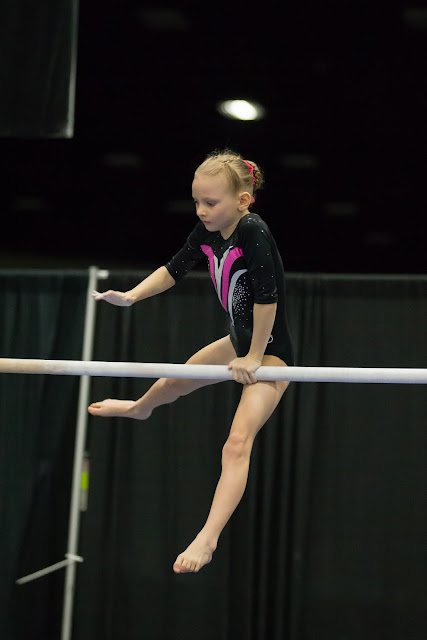 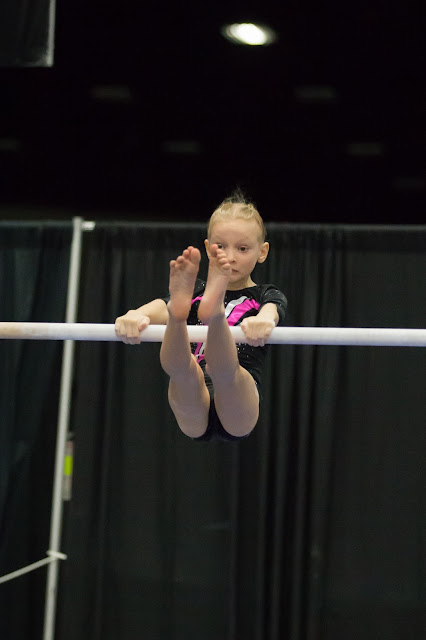 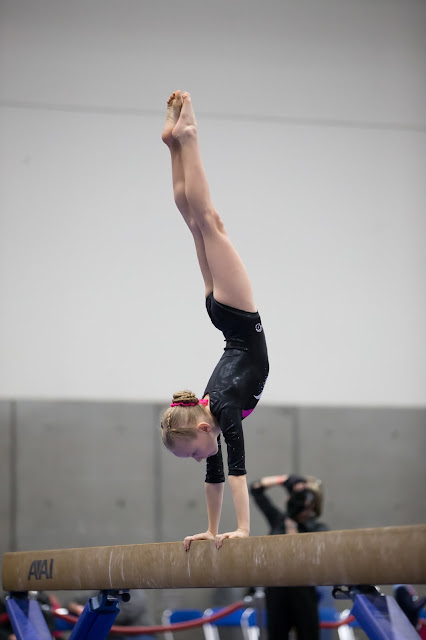 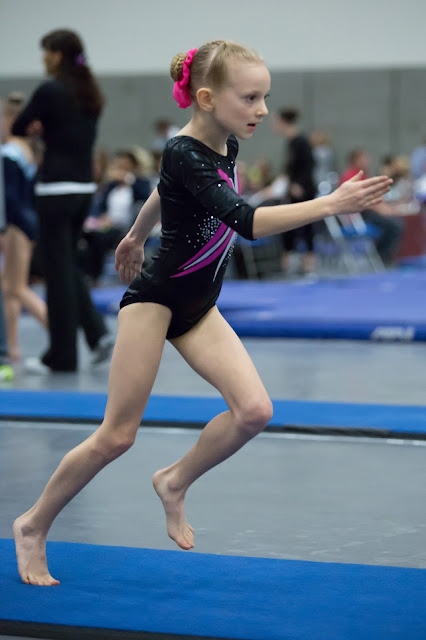 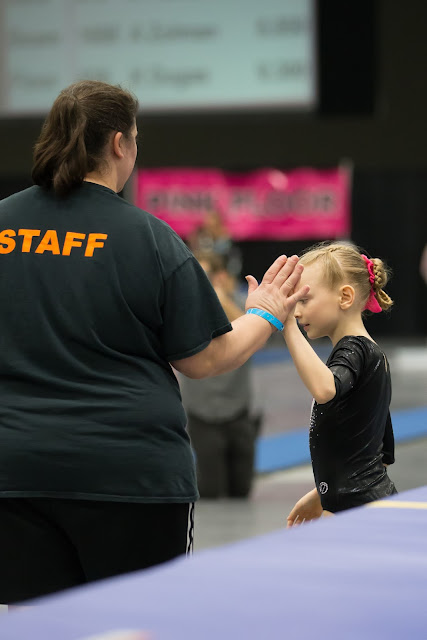 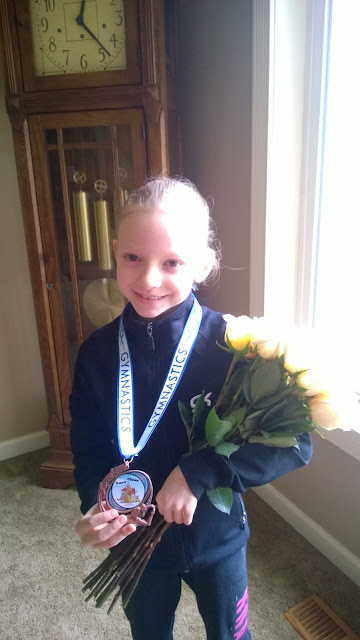 And because she can't get enough at the gym... 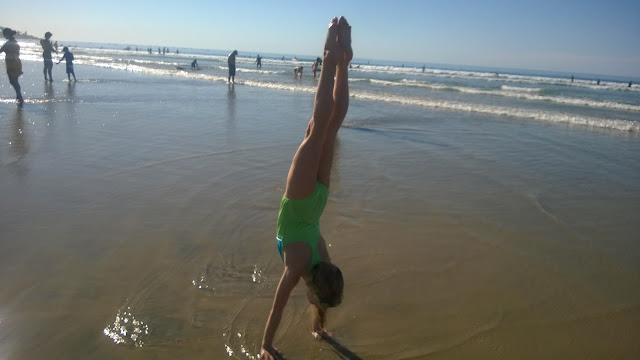 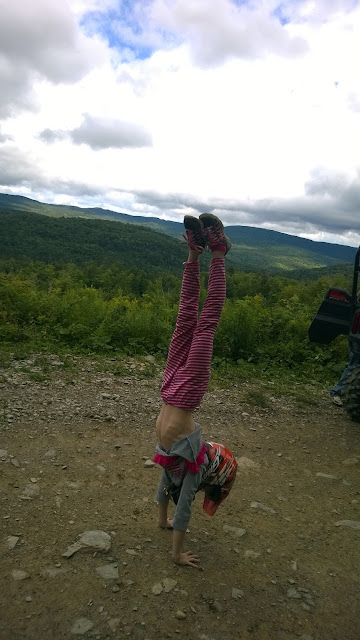 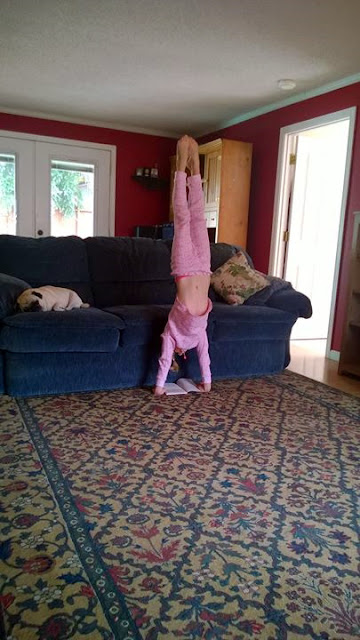 What "watching TV" has become...

What happens when there's more than 3 days between practices... 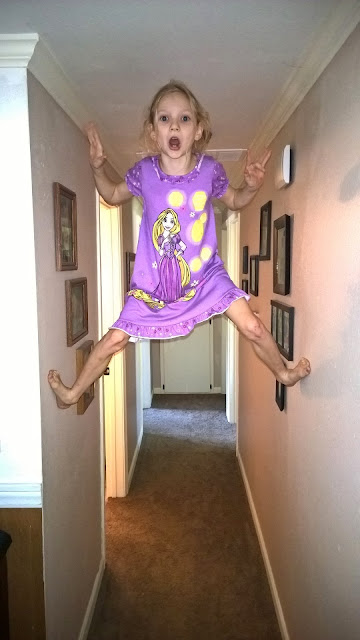 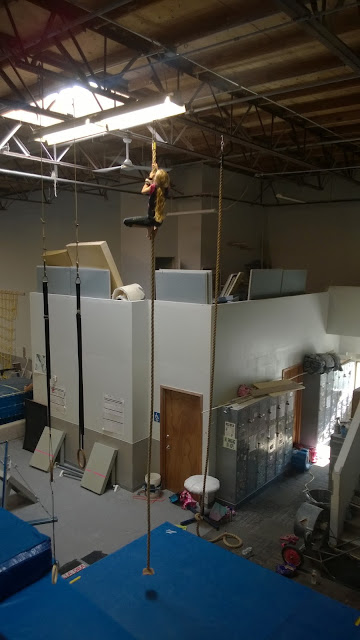 Posted by Stephanie Collins at 4:57 AM 24 comments: