All About The Badonkadonk

I've never been a party girl; large groups make me feel self-conscious and uncomfortable. In college my nickname was "Grandma Steph". While everyone else was out whooping it up, I was in the community kitchen of the dorm in my robe and fuzzy slippers, whipping up cookies, brownies and banana bread. I was the best friend to those who came back from the parties with a raging case of the munchies. They'd chow down while regaling me with wild tales of celebration and smashing good times. I'd be jealous, wishing I could have shared in the fun they were apparently having...until they'd share their war stories of projectile puking and/or deathbed hangovers. My life didn't exactly feel lacking for those particular joys. Things didn't change after college, either. Workplace holiday parties and big birthday bashes for friends...they just weren't for me. 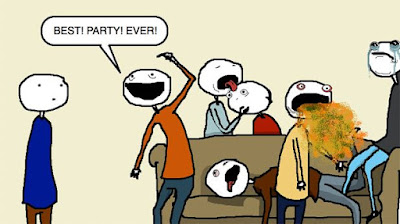 All of that changed last weekend. It started as most discoveries do - with a big jump out of my comfort zone. I learned about a huge Zumba party at my weekly Zumba class. It was a fund-raiser for breast cancer research. I decided to sign myself up, reasoning that worse case scenario, I'd just be making a donation to a good cause. Wow. I walked into the room wondering if I'd be walking right back out. I walked out two hours later, knowing that - after 46 years - I had finally found my kindred party peeps! 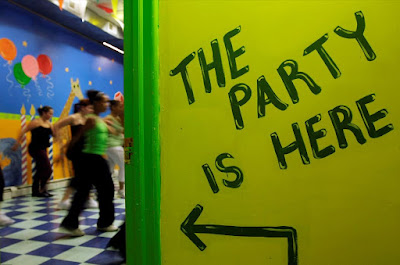 There were dancers of all types - men and women of all ages, skin tones, backgrounds, and lifestyles. There were folks ranging from lifelong dancers to people more like me (the overwhelming majority of my dance experience involves a vacuum cleaner for a partner). The mood was festive and friendly, but it was really all about the music. It was easy to immediately get drawn into the booming base and rockin' rhythms. There were songs of many genres (I mean...there was a conspicuous lack of smooth jazz, but plenty of variety, from Pop and Hip Hop to Latin and Bollywood). The music had me feeling everything from young and energetic to smooth and sexy to gritty and gangsta. There was probably a moment or two when I much more resembled the white-bread, middle-aged, suburb-dwelling, rhythm-less housewife I am, but... it was all good. Watching the instructors on the stage, every fiber of my being insisted I looked just like them. Besides, who cared? There were no judgmental eyes pointed my way - everyone else was just as focused on the instructors as I was. 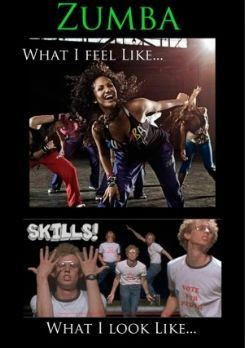 I can't recommend Zumba parties enough. If it were a requirement for all world leaders to attend a Zumba party before all interactions, we'd be living in a world of peace, health and harmony. I mean...this party had it all. Smiles. Laughs. Claps. Hugs. Dance. Could it have been any more fun? Why yes, yes it could. When I got home my Fit Bit informed me I had burned 873 calories. Now THAT'S a perfect party! 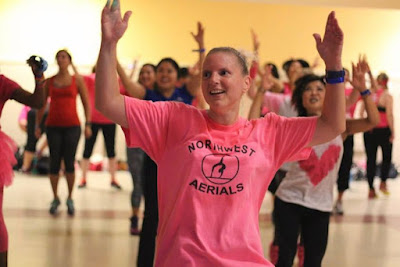 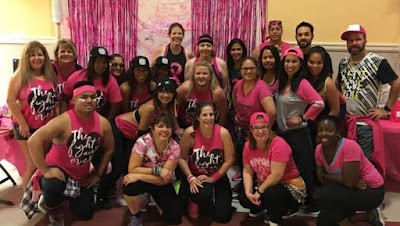 This post is dedicated, in part, to all of the amazing instructors at last week's party, with special thanks to my instructors (past and present) Kim, Dipa and Kristin!

I also dedicate this post to Maddie's new physical therapist, Jill. A few months ago Maddie landed wrong out of a front tuck and hyper-extended her knees. Luckily, she had no complaints of pain after a day or two, but it occurred to me that now, with a schedule of gymnastics 4 days/week, she would have little to no recovery time in the event of another injury. I decided to start some preventative physical therapy for her.

In the initial evaluation, Jill discovered Maddie was having some trouble with a few moves involving her knees. It surprised me, because I was sure she had fully recovered from her hyper-extension. Jill explained (sprinkling in a lot of anatomical and technical terms I won't bother to try to remember...or spell) that the issues she had discovered didn't really have to do with Maddie's knees at all. Maddie had been using muscles in her thighs to power herself through various jumps and flips, when she should have been using core and gluteal muscles. 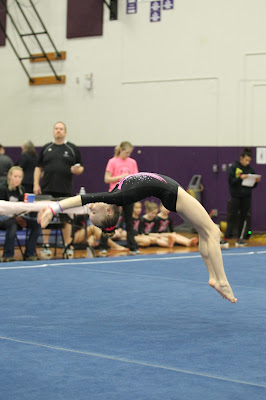 The pain in her knees is caused by the thigh muscles and tendons becoming so tight from overuse that they pull on the knees in certain movements, creating discomfort. It's apparently a common problem for gymnasts. She said the plan was to loosen up Maddie's thigh muscles while working on engaging the core and gluteal muscles, so it would become natural for Maddie to use the correct muscle groups when flipping and jumping. She concluded, "Not only will this help your knees to feel more comfortable, but you'll actually be able to jump better and with more power once you're using these muscles (she pointed to Maddie's bottom) instead of these muscles (she indicated Maddie's thighs). Maddie considered Jill's words for a moment and said, "Sooo...what you're saying is, it's allllll about my badonkadonk."

Yes. Whether we're shakin' it or strengthening it, this month it's been all about the badonkadonk. 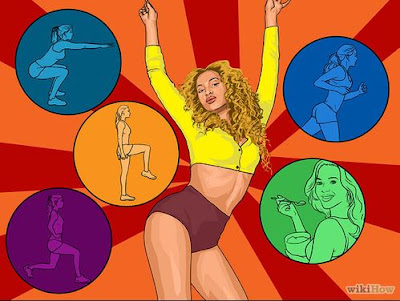 Posted by Stephanie Collins at 8:14 AM 2 comments: