This month Hannah turns twenty. Twenty! For those who read the book, who would have guessed? Another year of survival is always quite an accomplishment for Hannah, and a year that has included more good days than bad is especially worthy of celebration. I'm not sure how to "classify" this past year. It included the biggest "close call" in years.

Her most recent brush with death before this year was when she was twelve. She suffered a serious respiratory infection. The illness, itself, wasn't any worse than any other she had battled. The difference that particular year was that Hannah appeared to have given up. She put no effort into her cough, so her lungs weren't clearing. She had no more "spark", no "spunk" to knock out what ailed her. Everyone saw the change. Doctors adjusted her patient status to palliative care (essentially "one step up" from hospice care), and a Make-A-Wish vacation was even coordinated. We prepared the proper paperwork for advanced directives (also referred to as "Do Not Resuscitate orders", or "DNR orders"). Hannah had enjoyed more good years than bad at that point, and we didn't want to "ruin it" with a lot of heroic measures that would draw out any suffering. Discussion of what medical intervention we wanted from that point forward (and what we would refuse) was emotional, difficult, and fraught with second-guessing and conflicted feelings. We ultimately decided to allow IV access and cardiac monitoring when necessary, but no intubation/mechanical ventilation. Antibiotic use would be determined on a case by case basis.

Hannah ended up pulling through that particular illness. Dr. Fieldman further helped her out with a stroke of genius. He suggested a small dose of Prozac. I couldn't understand how that would help her, but it seemed benign enough, so I acquiesced. It was absolutely life-changing. About two weeks after the first dose, Hannah's teacher called me in the middle of the day. "She's back!" she excitedly exclaimed, "The sparkle is back in her eye, the smile is back on her face...she's Hannah again!" Hannah's apparent "giving up on life" had been a simple issue of depression. Prozac returned her pluck and we continued on for 7 more relatively smooth years.

Hannah's advanced directives didn't really come to mind again until last December, when she was hit with another brutal, flu-like illness. Daniel and I had multiple discussions about the severity of her illness and our plan of action. We ultimately decided to leave the DNR orders in place. I tried to prepare myself for what it all might mean for Hannah - imagining hospice nurses milling around her bed and a steady stream of IV morphine to keep her comfortable. As it turned out, Hannah (once again) demonstrated her strength (and stubbornness), and beat the illness. I breathed a huge sigh of relief, once again setting aside uncomfortable thoughts of advanced directives.

A few weeks later my attention had completely shifted to the challenges James was presenting, both at home and at school. July's blog entry (Expectations, Misconceptions, and Blindsides) mentioned a specific day that featured him throwing a log through our shed window. That was on a Saturday. On the following Monday I was on our roof, taking down our Christmas lights, running through my mind the conversation I would have with James when he got home from school. My cell phone rang. The high school showed up on the screen. Never a good sign.

"Hi, it's Paul from the medically fragile room. We were just loading Hannah onto the bus when she started seizing. It's a pretty severe one this time. We've called 911; the paramedics are on the way."

I was already half-way down the ladder. "I'll be there in a minute." I tried to breathe through my anxiety as I slammed the car into drive and zipped out of the driveway. The school had called me multiple times about seizures. It was usually a case of a small seizure or strange behavior they thought might be a seizure, and it was almost always resolved by the time I got there. They hadn't called 911 in years, but I was determined to remain optimistic; maybe it was a new staff member who panicked over something harmless.

One glance at the scene as I pulled into the school parking lot obliterated my optimism. Hannah was on a gurney next to an ambulance, surrounded by paramedics. Teachers and staff were standing huddled off to the side, white-faced and wide-eyed. Sarah was pale, blue-lipped, and jerking violently. I immediately had flashbacks to her grand mal seizures of infancy. I hadn't seen a seizure this bad in well over a decade. I did my best to shake off my emotional response and switched into crisis mode. I gave the paramedics permission to administer a rescue med, then went to the teachers for a more complete accounting of what led to Hannah's current status. As her teacher finished his report, I was on the phone, calling Daniel.

"Hey, hon. I'm at the school with Hannah. She's seizing and it's a big one. Paramedics are working on her now. I hope you don't have any critical work meetings scheduled for the afternoon. I need you to call Maddie's school and tell them she'll need to go to their after-care program for about an hour after school. If you go to the barn to pick Em up from her volunteering gig at 4, you can swing by Maddy's school on your way back, around 4:30. That should give you enough time to get her home to change into her leotard and grab her snack bag. She needs to be at gymnastics at 5. I'll call Mary Beth and cancel today's tutoring session for James. Emily can stay home with James while you're at the gym with Maddie. Let Em know there's ground beef in the fridge for spaghetti. Tell her to set a timer to remind her to start cooking it at 7:45 so it'll be ready when you get home from gymnastics around 8:15. I'll check back in with you when I can. Love you."

"On it. Man...it's been a long time since this has happened. Give Hannah a hug for me. Love you, too."

I checked back in with the paramedics. As I feared, the rescue med had done nothing to slow the seizure down. They were preparing a second dose. I held Hannah's hand, offering her words of encouragement that were more for me than her. The second dose wasn't touching the seizure either...but her respiratory status was plummeting. The paramedics were placing an IV; I stepped away for a minute to make the call to cancel tutoring. When I returned, the paramedics were grabbing more supplies and one said, "She's really struggling to breathe here and her respiratory rate has dropped dangerously low. We're going to intubate."

"Do you have a copy with you?"

"Well...if we can't intubate, we can't do anything else for her here. Let's get her over to the hospital." They began preparing to move her into the ambulance.

I was back on the phone with shaking hands. "Hon? ...Uh...Shit just got real... They need to intubate and I had to tell them to stop. I wasn't ready for this today..."

"You want me over there? I can be there in a minute."

"You can tell them to go ahead and intubate."

At the hospital the ER doc was able to administer a large dose of an IV seizure medication - one that (unlike the rescue meds the paramedics had used) had no respiratory side effects. We watched anxiously for her respiratory rate to rise, her heart rate to drop, her respiratory effort to calm down, and for the rhythmic jerking of her seizure to subside. Finally, about an hour after the seizure had begun, it stopped. She was out cold - exhausted and heavily medicated - but seizure free. Her respiratory status wasn't great, but it was improved - a good sign. Chest x-rays showed no obvious sign of an aspiration pneumonia - another good sign.

We stayed in the hospital overnight for observation. It was an overabundance of quiet, alone time for me to obsess over the "what if's", to second-guess (and third and fourth...) my decisions, and to empathize with anyone else who has ever been put in the gut-wrenching position of following through on DNR orders. I distracted myself with thoughts about how to handle James' recent over-the-top behavior. It was far from a restful night.

That was 7 months ago. Hannah has not had another large seizure since that afternoon in January. She's still recovering...or maybe irreparable damage was done; I'm not sure which. Before the seizure, I would say Hannah's cognitive ability was that of about a 9 to 12-month old. After the seizure, she has remained at an ability level more like a 3-month-old. She has lost most of her curiosity for her surroundings. I used to set her down in her La-Z-Boy chair and she'd slide to the floor and scoot on her bottom to the dog's water dish and dump it over, into the bathroom to check out the toilet, into the kitchen to pull down the recycling bin... Now she's quite content to just sit. And sit. And sit. She's not as expressive either. She's never been verbal, but she had a number of sounds we had learned to associate with various moods. Now there's essentially two. There's a happier coo, roughly resembling that of a dove. Then there's the less-than-happy coo - a dead ringer for the whine of the skeksis in The Dark Crystal. Most disturbing has been the absence of her laugh. A few weeks ago I asked Daniel if he remembered hearing Hannah laugh since the seizure. Neither of us could recall a single snicker since January. Miraculously - as if to offer me some peace of mind - the very next morning when I was changing Hannah's diaper, she gifted me with a very brief (but unmistakable) chuckle. I was able to get her to do it twice with tickling, then she was done. I haven't heard it again since (despite multiple attempts to get her to repeat it), but I'm hopeful we'll once again be gifted with her completely infectious belly-laugh someday soon.

So...we jump into Hannah's twenty-first year with hope to make back some ground we've lost, thankful for the good times she has enjoyed, and forever proud of her strength to endure the hard times of the past. 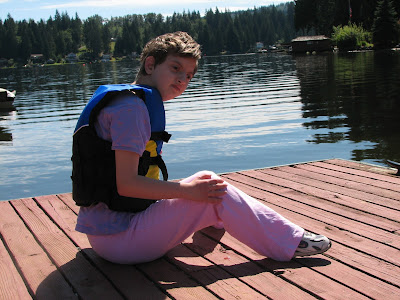 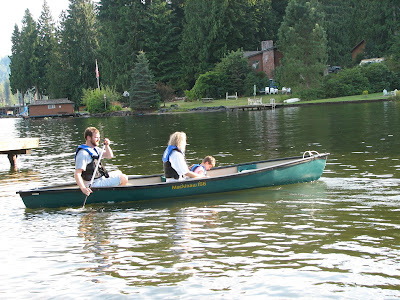 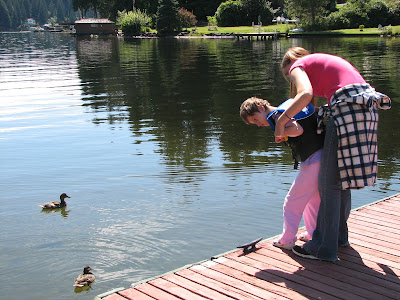 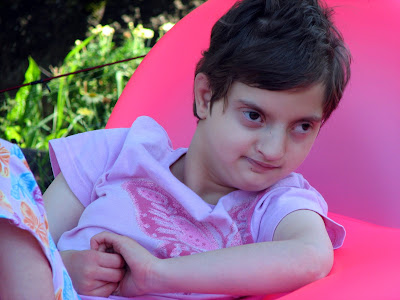 The "Morning-After Hangover"
In the hospital, the day after her seizure 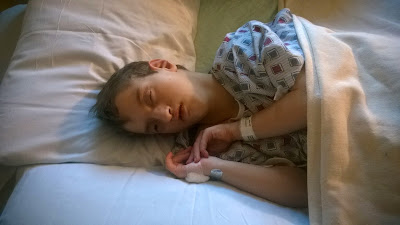 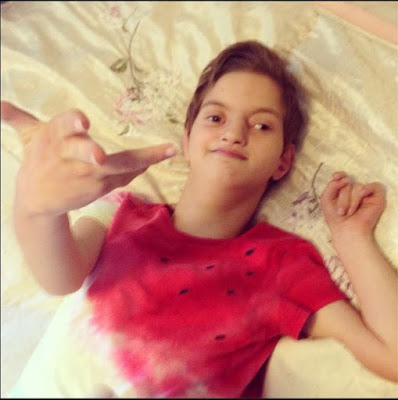 Posted by Stephanie Collins at 9:44 AM 6 comments: